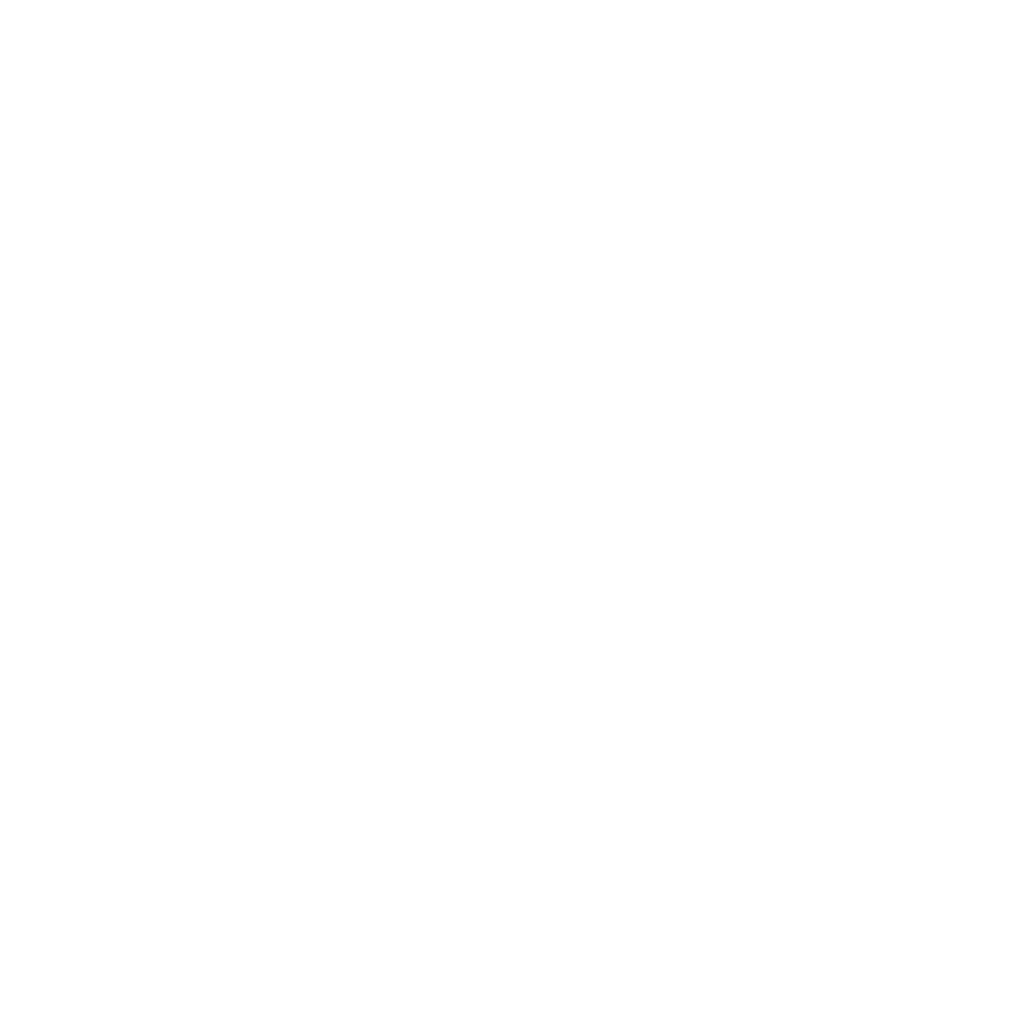 PrevPreviousThe Story Behind the Image

Leaving every place, a little better than I found it!

It might sound a bit holy, but I can in all honestly say, that I try to give a little back every time, I visit a new place. My intentions are good, but of course I cannot promise that it always turns out for the better or that I have not done bad unconsciously.

So, what am I talking about, when I say I want to leave a place a bit better, than I found it? I am talking about cleaning up in Nature, mainly underwater, but especially bringing awareness to everyone I meet, about the enormous amounts of waste, that is trailing after our every step and how we can reduce the amount of trash we produce. The clean-ups are fun and mentally rewarding and a good place to start the conversation about what each one of us can do in our everyday life starting today. 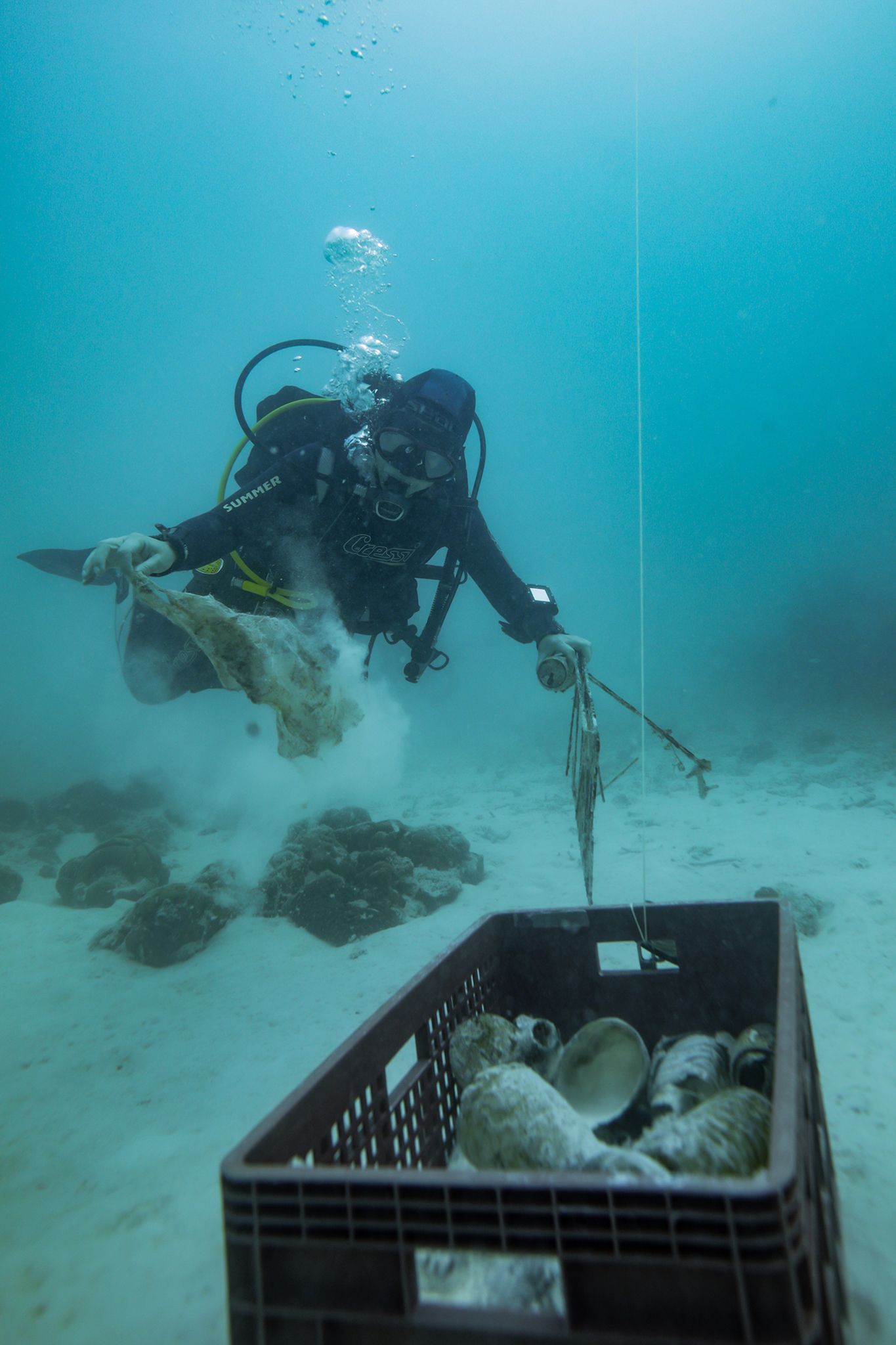 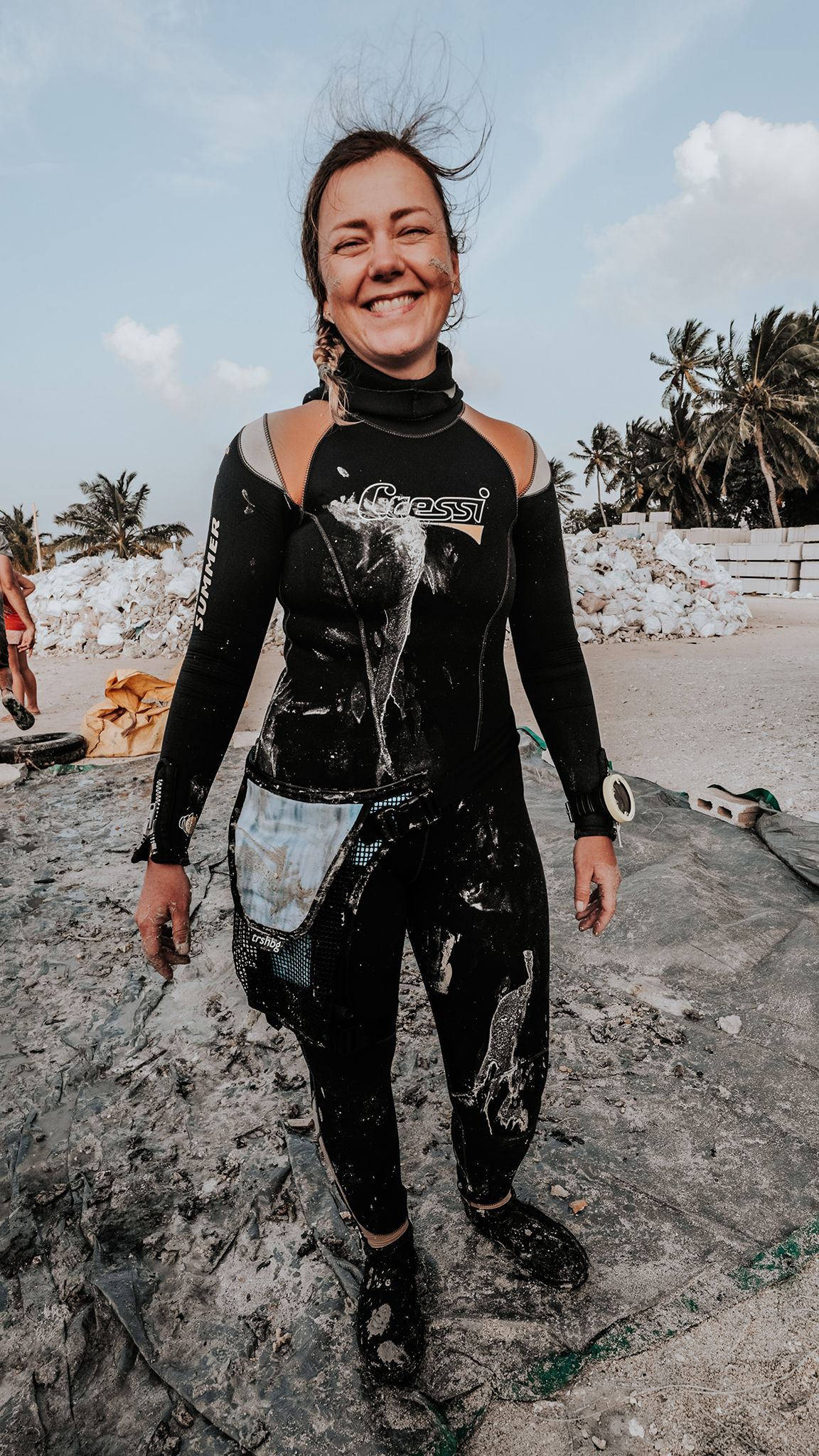 On my recent trip to the Maldives, I visited the island of Rasdhoo travelling with Simply Breathe. An Indian based company founded by Bhushan Bagadia, Michelle Pereira and Karan Metha, that aim to combine diving with conservation and mindfullness. A perfect cocktail in my book and of course these guys were onboard with my idea to arrange a clean-up on the island. The advantage with Rasdhoo and also one of my reasons for choosing this type of Maldives experience is, that it is a local inhabited island. Real Maldivians live here with their families. This distinguishes it from the resort islands that I don’t see myself visiting. Of course, I shouldn’t generalise, but building resorts with independent cottages in the ocean, can only come at a very large environmental cost. In Rasdhoo you stay in simple, but comfortable guesthouses amongst and with respect to the locals. And for this reason, you have great contacts and support when wanting to arrange a public event. It did take some preparation and planning though, so my check-dive quickly turned into a clean-up dive, where Karan and I tried to test out a method we could use for cleaning underwater in the area. Later, I tested the method again and found that a few safety measures needed to be changed. And once, I had a method clear, Bhushan and Firaag Ahmed, the owner of the guesthouse Shallow Lagoon, contacted Rasdhoo Council and all dive clubs on the Island to engage as many people as possible for a public clean-up. 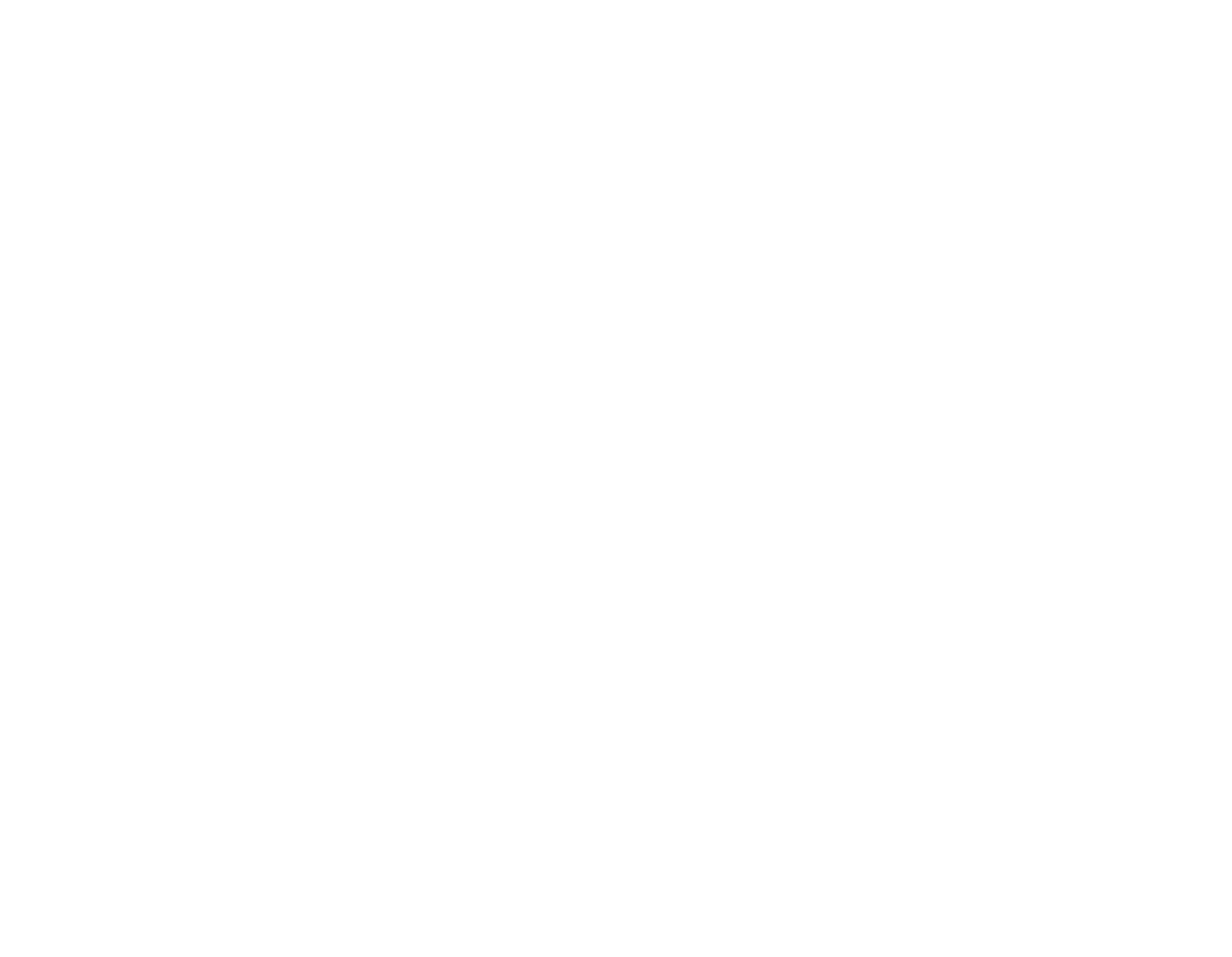 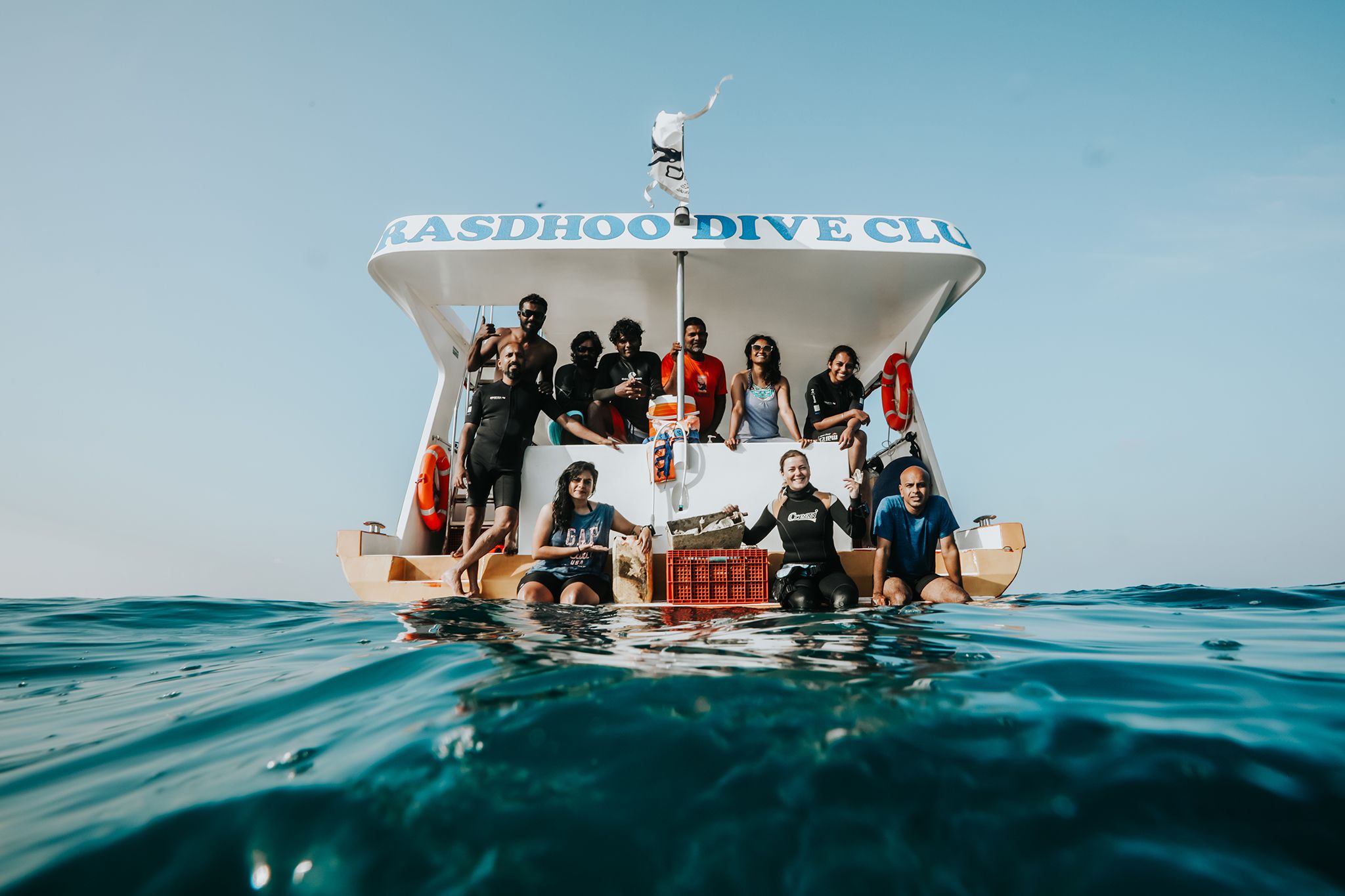 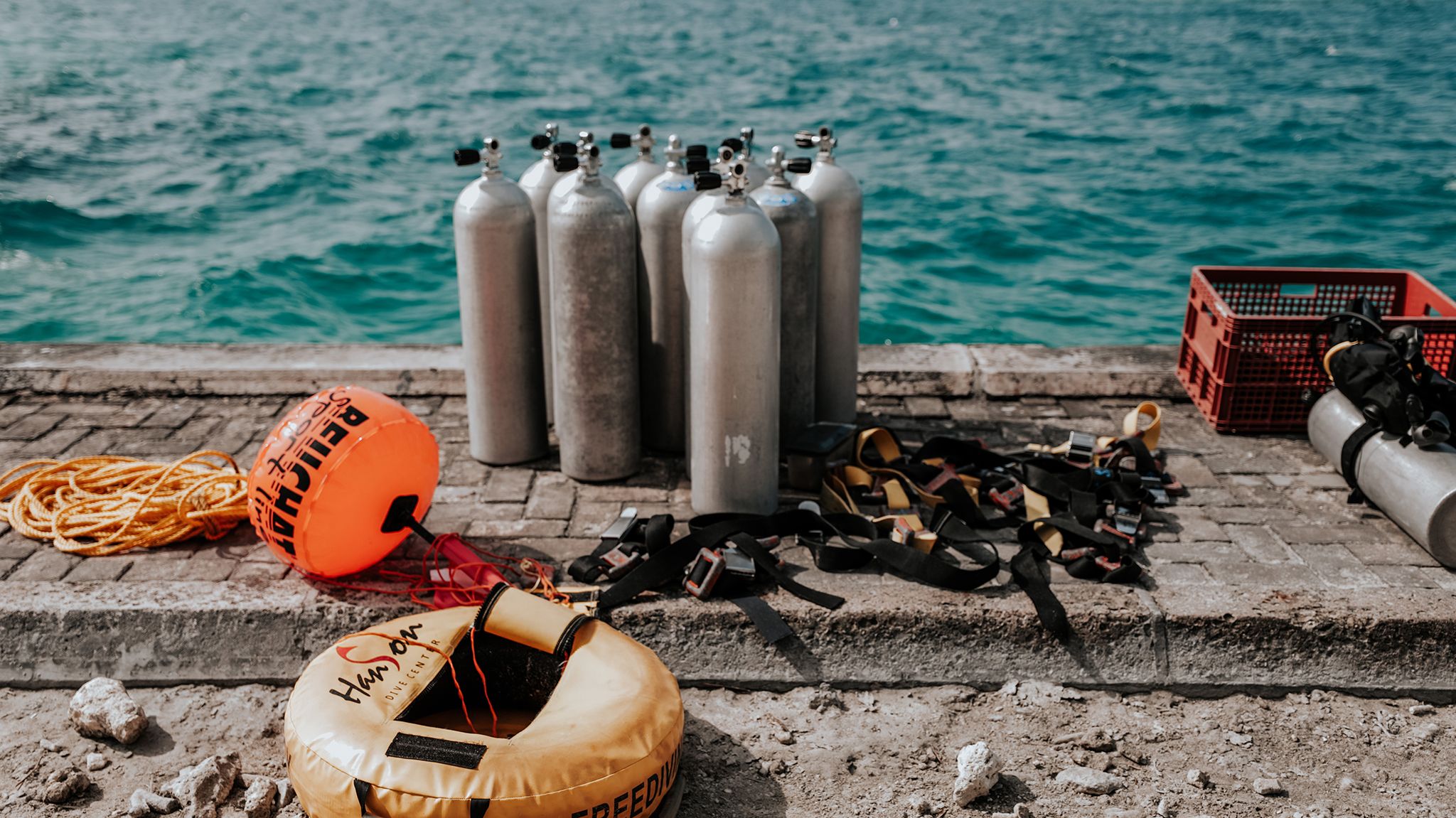 We created an equipment wish list that Firaag and Rasdhoo Council did everything in their power to meet. Remember, we are on a tiny island, so materials are limited, but with a bit of creativity we managed to get what we needed, so that we could let the volunteer divers do safe clean-ups.
We made the various dive clubs liable for the divers they would bring and supply scuba gear for them. The council assured that a part of the harbour would be closed for boat traffic for a full 2 hours, so that we didn’t have to worry about boat traffic. But even so, we asked that each buddy team mark themselves with an SMB. Like this, one diver would operate the SMB, the other diver would carry the trash net. 2 freedivers could then monitor the teams from the surface and always know their whereabouts. Rasdhoo Dive Club made sure we had emergency kit and oxygen available, just like at any other dive. 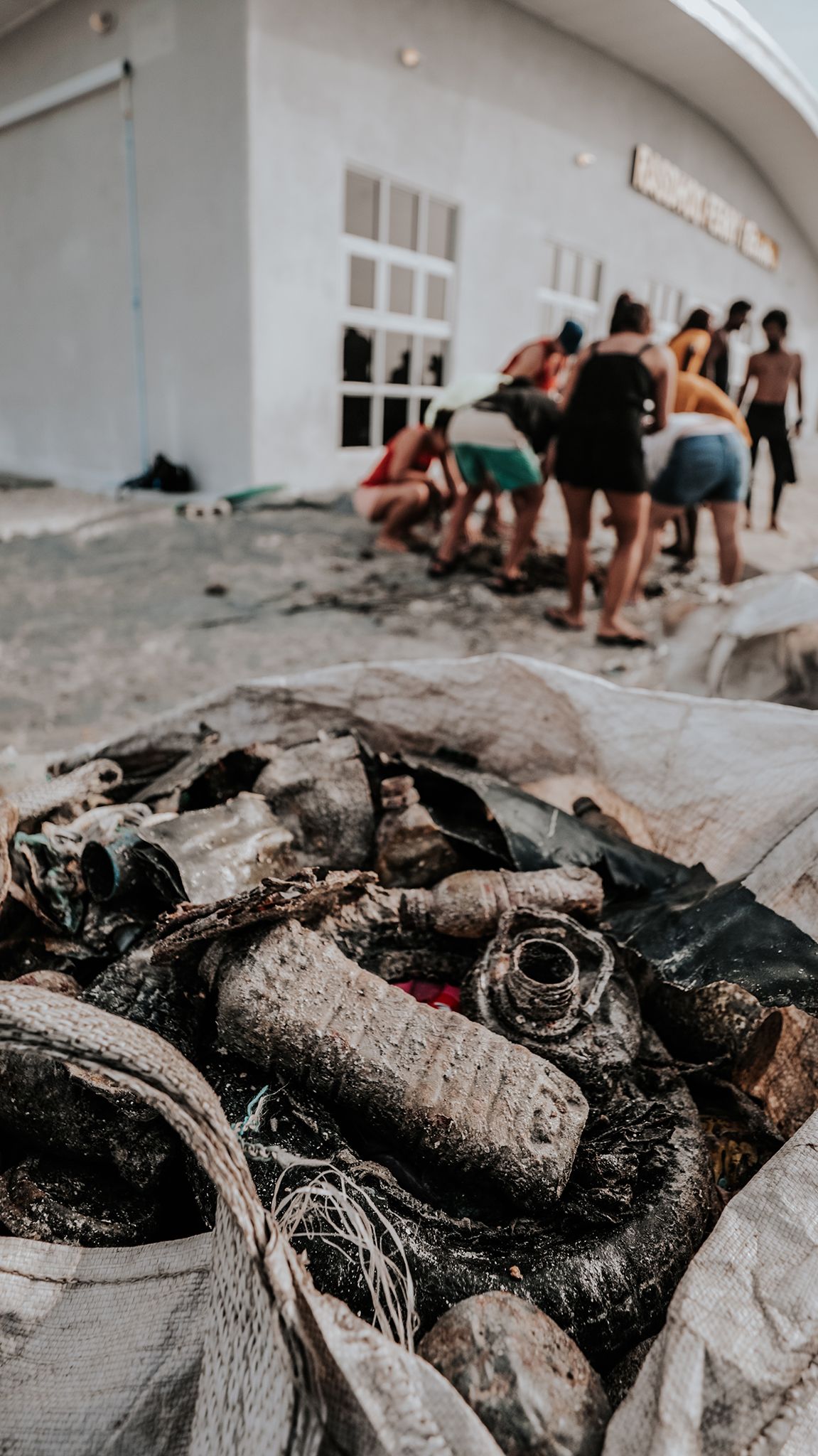 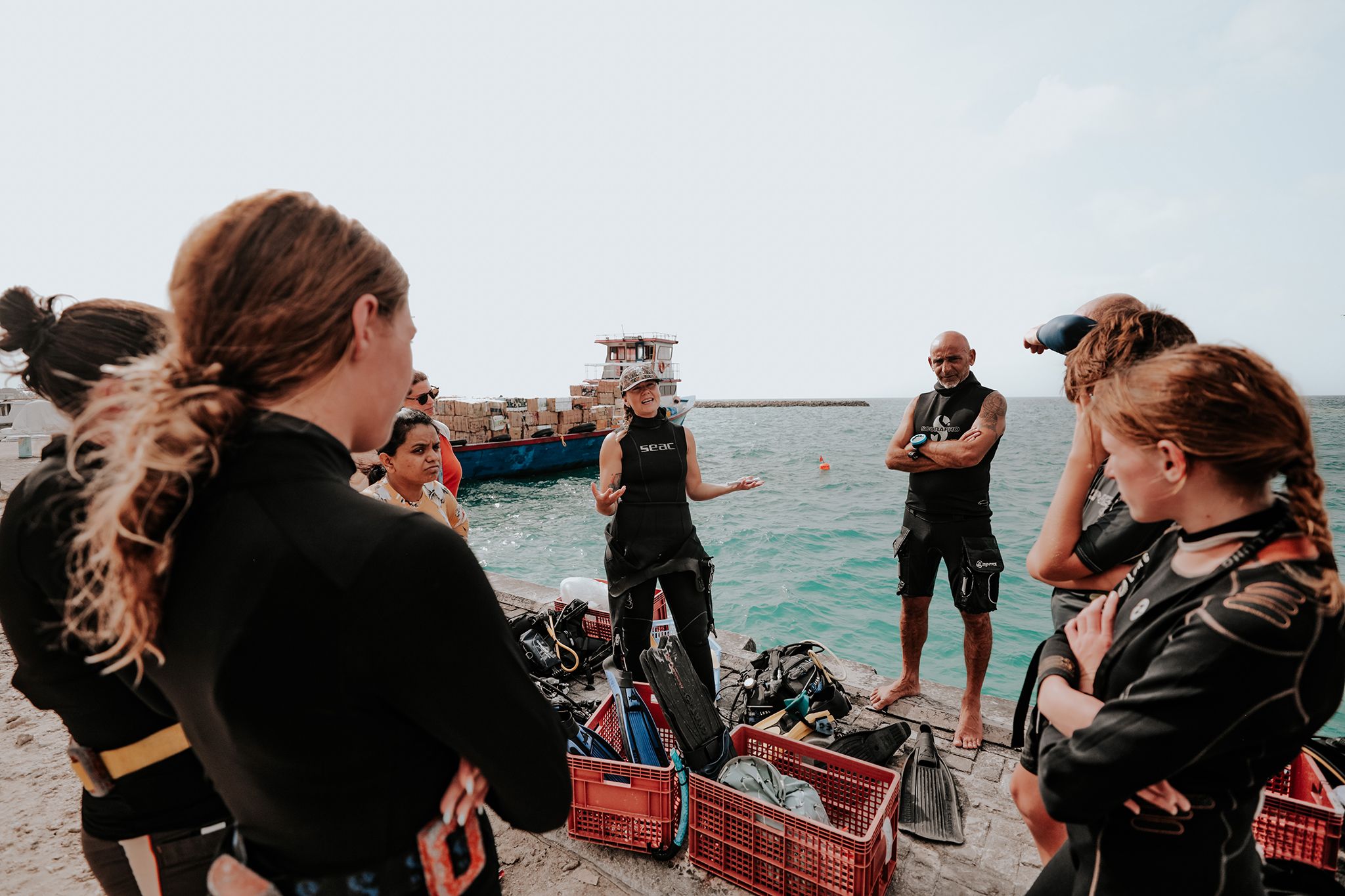 I gave the divers a very thorough briefing on how to dive and what to collect and what not. Some of them had never participated in a clean-up before, but all of them were Advanced Certified and above and we paired the buddy teams so that an experienced diver would dive with a less experienced diver. It might seem like overkill, but most divers will be surprised at how much visibility is impaired once you start taking stuff up from the sand, even in a location like Rasdhoo, where the sand is rather heavy and will sink fast. Another thing, I emphasized is, that we need to treat the site we clean just as gentle as we would a reef. There are animals living in the sand and maybe in some of the trash. So as divers we need to make sure, we don’t do more harm when cleaning.
At the surface a team of hard-working people were checking and segregating the trash that came in at a rapid speed. Again, all items were checked for living creatures and many tiny crabs and fish were saved and released back into the ocean. 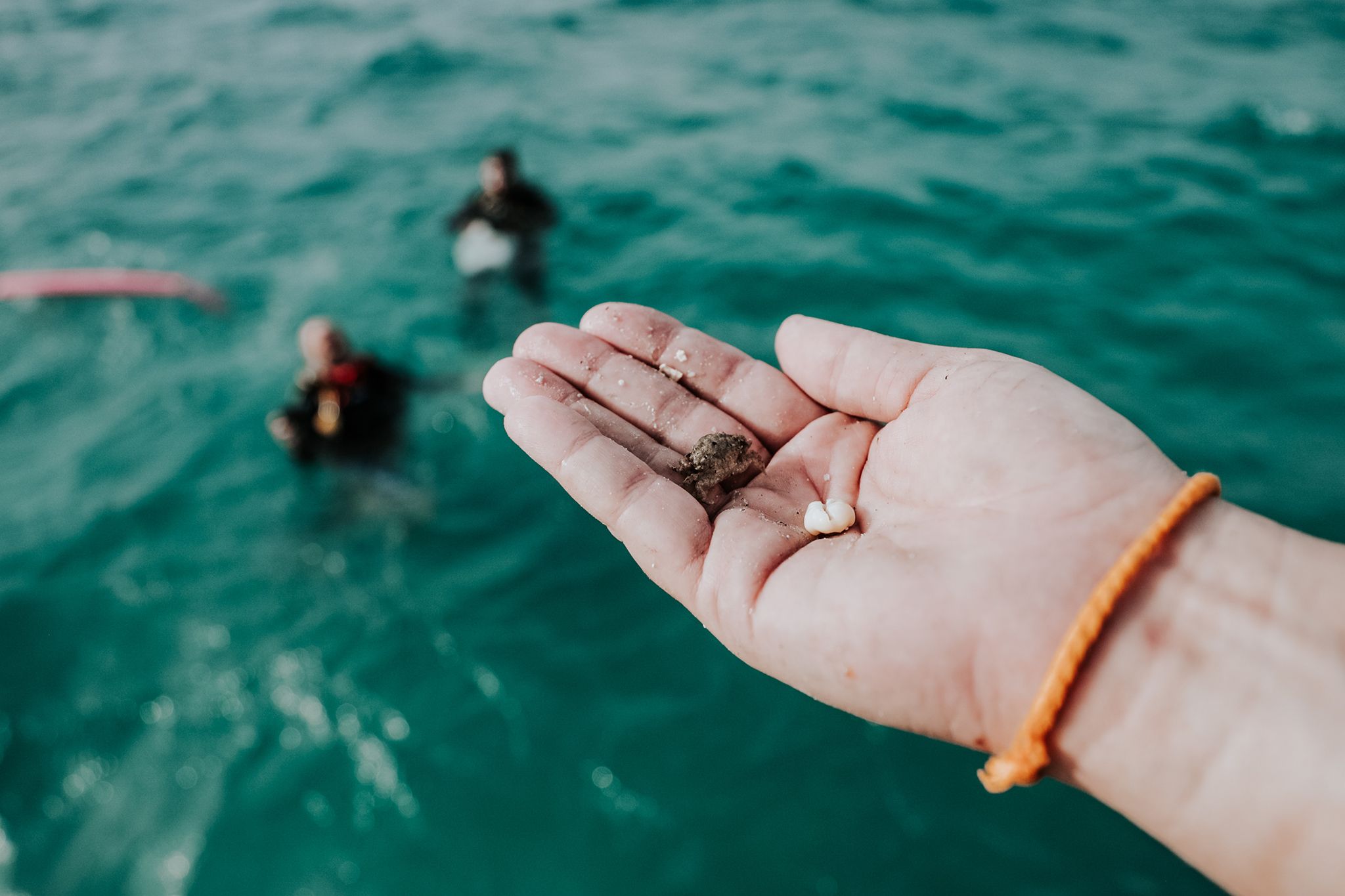 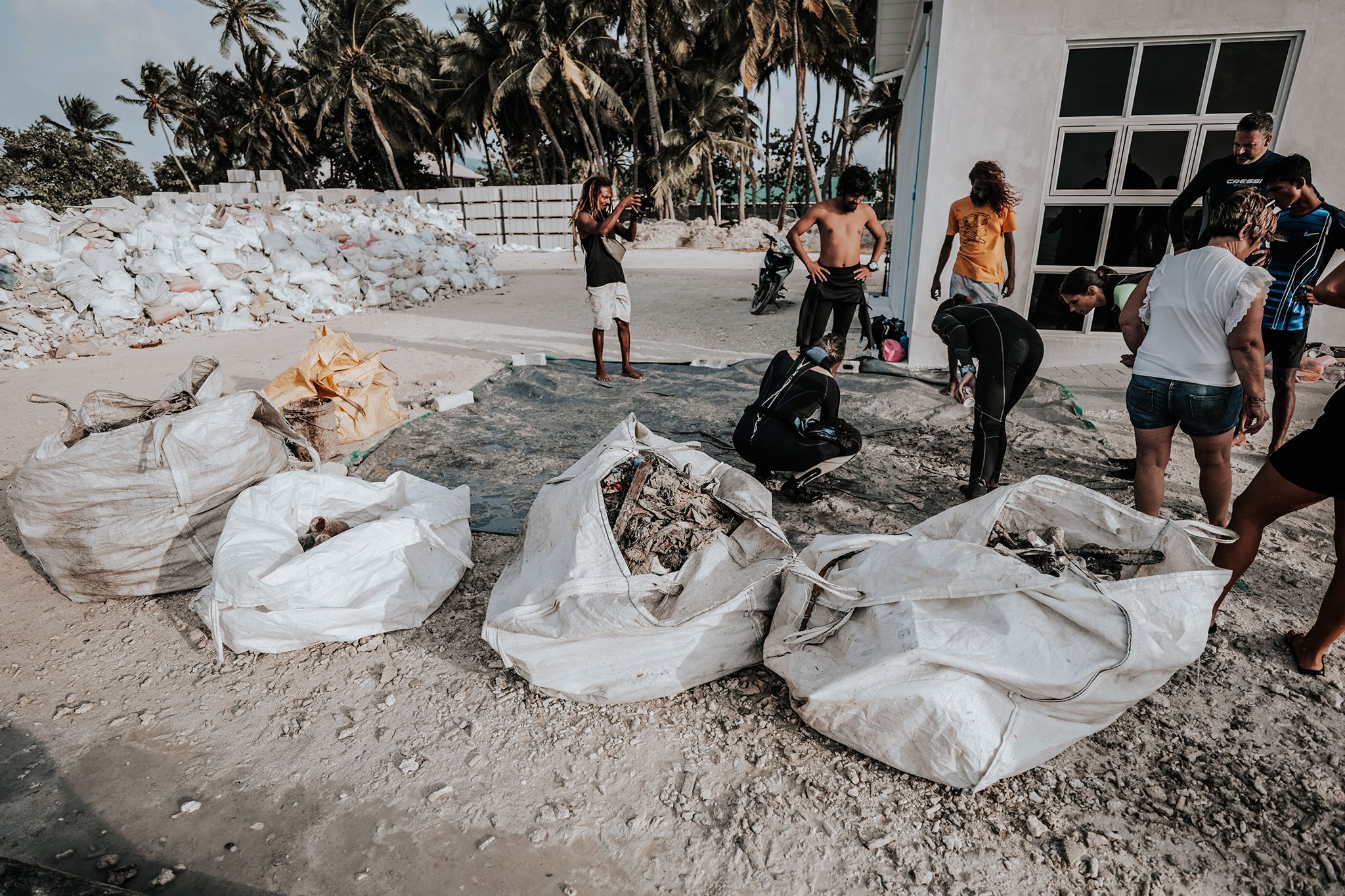 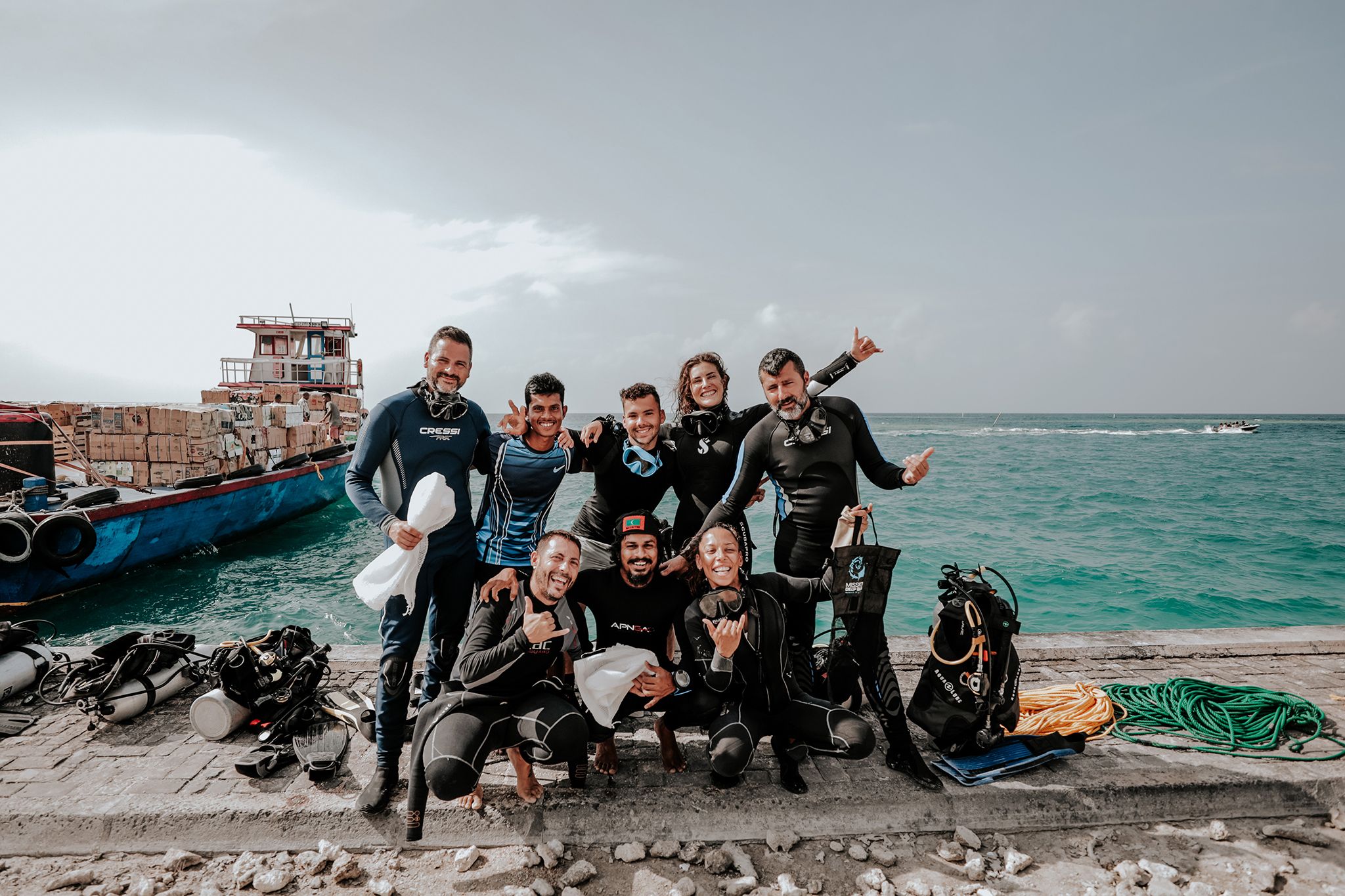 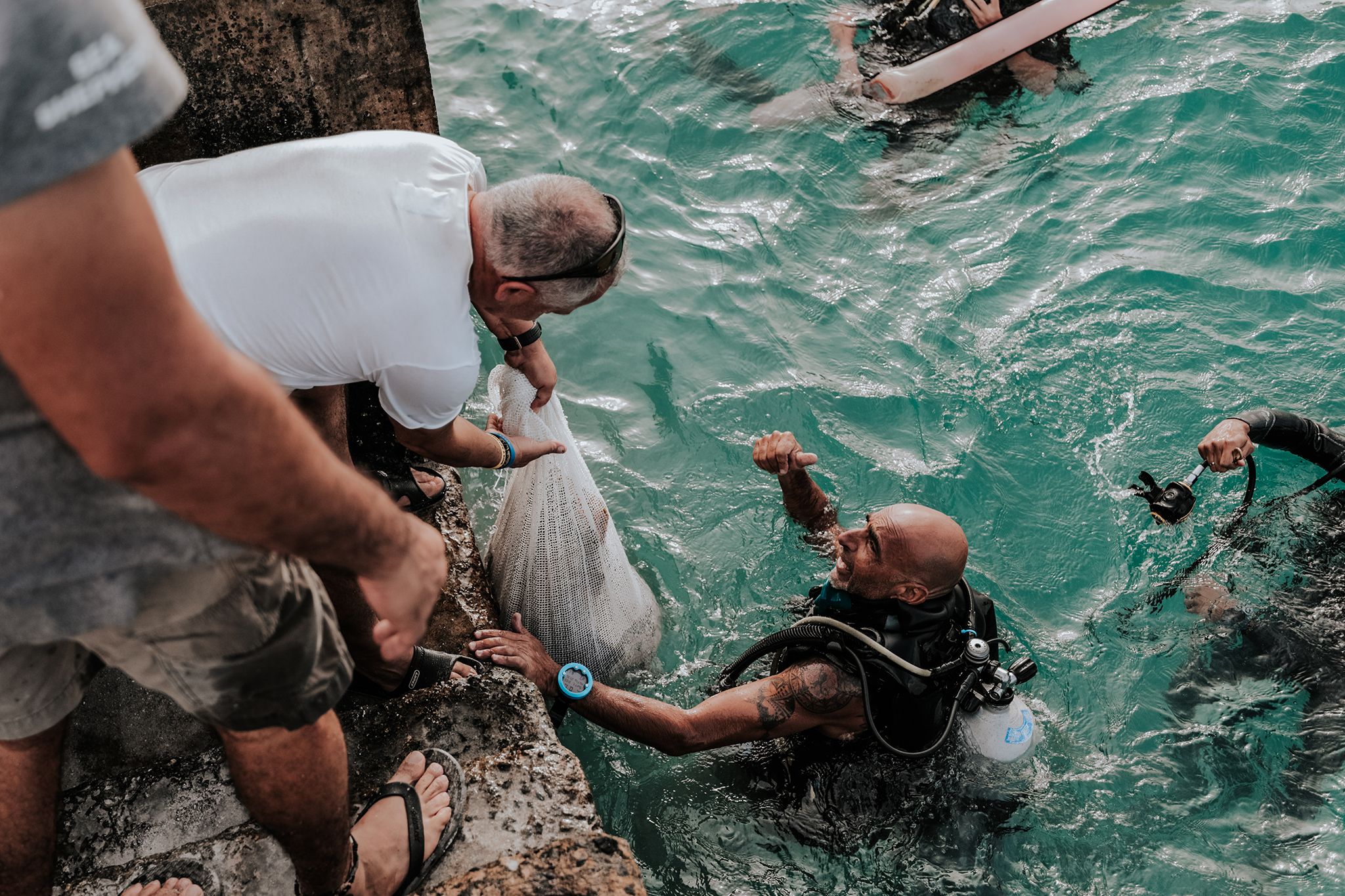 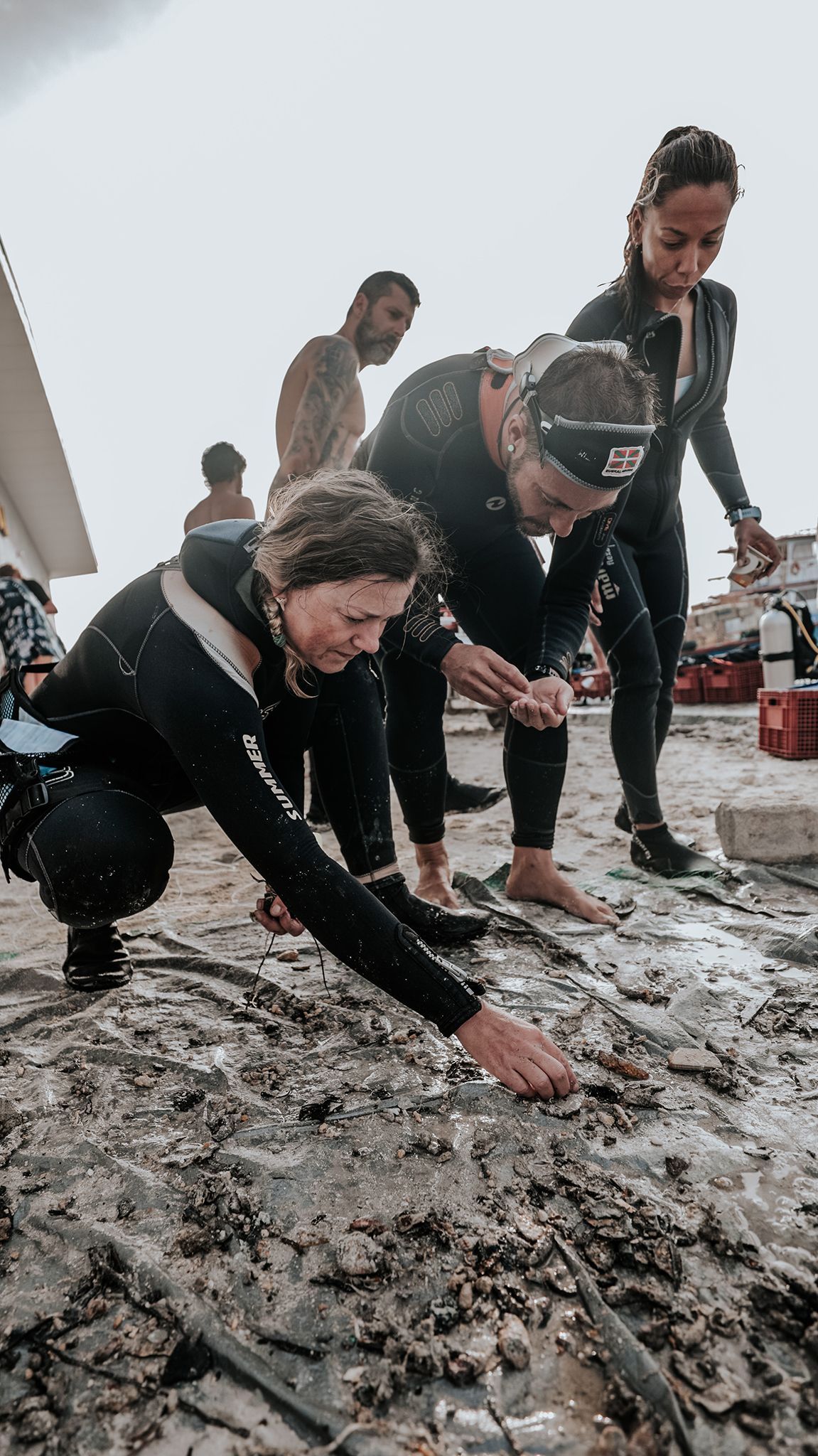 Though the ocean trash might not be able to re-enter the recycling system, the process of segregating might be the most important and informative part of this whole operation. This is when you really start realizing that we are all a huge part of the reason for these things ending in the ocean. Most of what we dive up are things we use several times a day.

On an island in the Indian Ocean, plastic bottles were expectedly our item number one, and we filled a whole big bag with them. Meanwhile, some of the participants were drinking out of that same type of bottle. You could state that a proper waste logistics would avoid for a recyclable material to end in the ocean, which is true. But let’s face it; waste management systems aren’t bulletproof and very costly, so why not reduce the number of bottles we use in the first place. But how would we then get water? Well, there are filtering systems that can be installed and if that is not possible for one or the other reason, better fill your own reusable bottle out of the large gallons, that have a value in themselves and therefore more likely to be taken to recycling. It is in general a good rule of thumb, when it comes to consumer trash:

The smaller the item, the more likely it is to end as trash in Nature. ‘It slips through’ so to speak. But also, quite often, the following rule applies as well: The smaller the trash, the more meaningless it was to begin with.

Like singular pieces of bonbons wrapped in plastic or the singlecup-instant-coffee pouches. All these commodities just adds on and on and on and on.. so do everything to avoid this and when you’re a tourist somewhere, maybe even state, that you will not have this. Demand better alternatives. 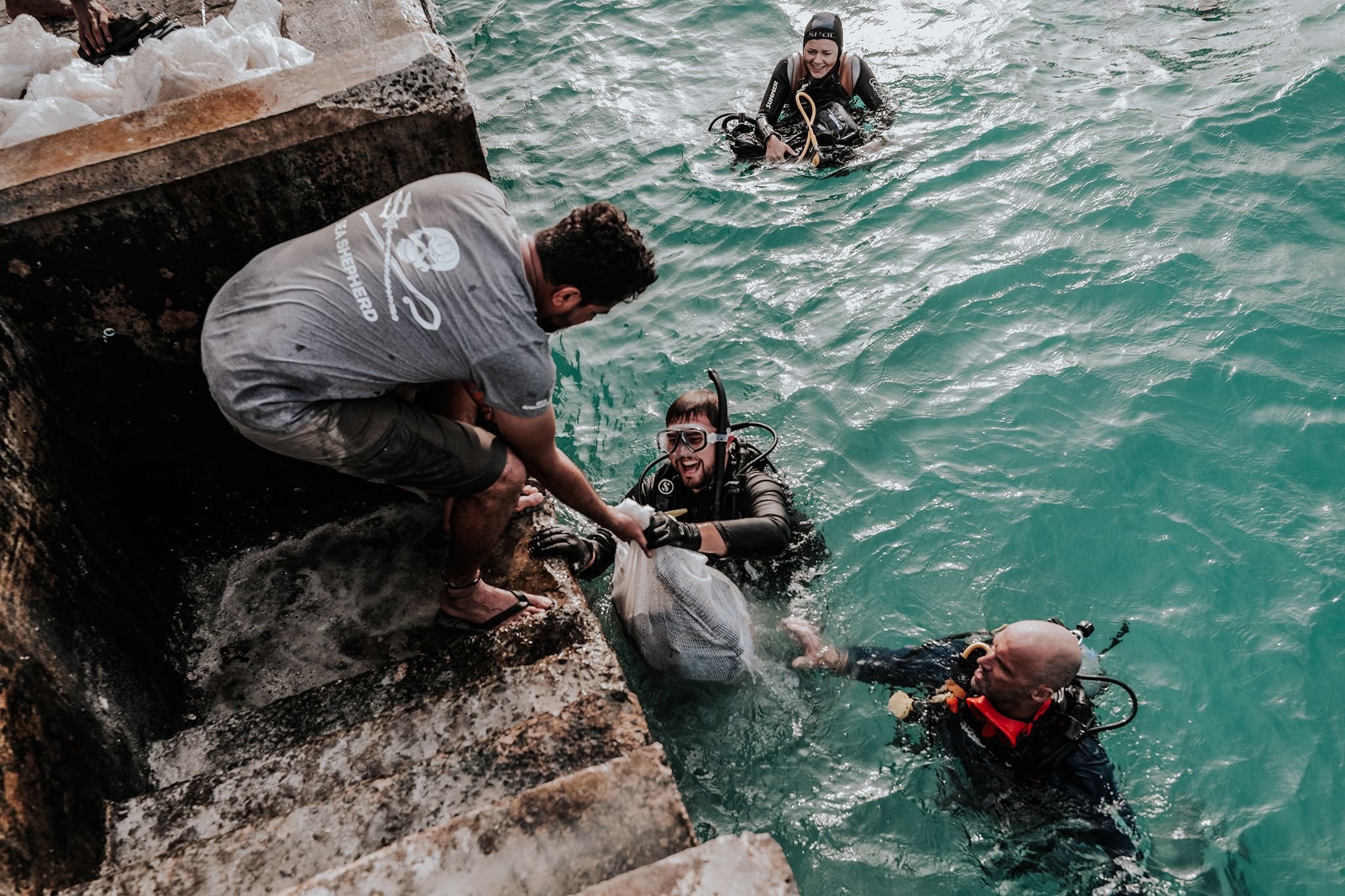 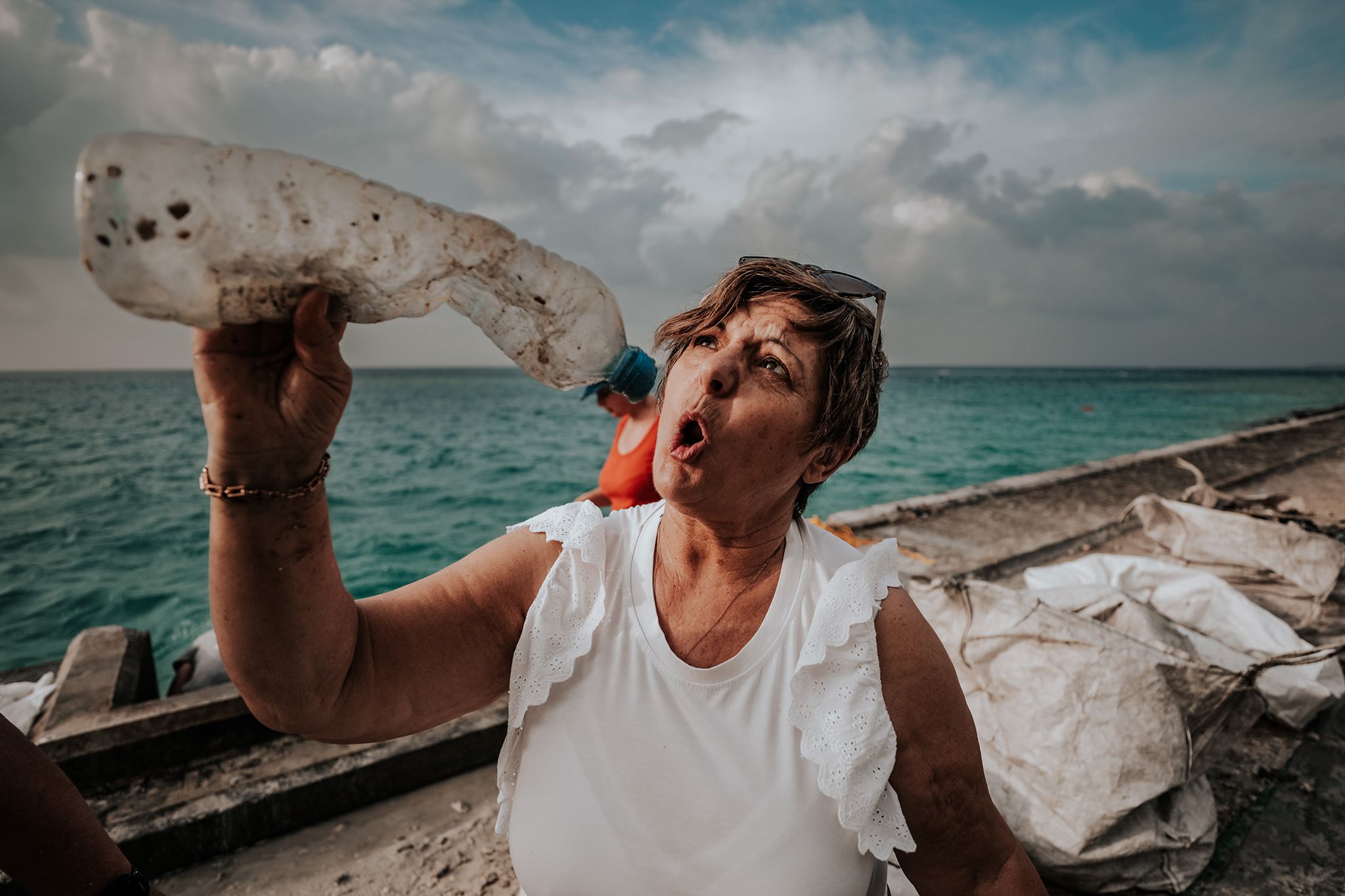 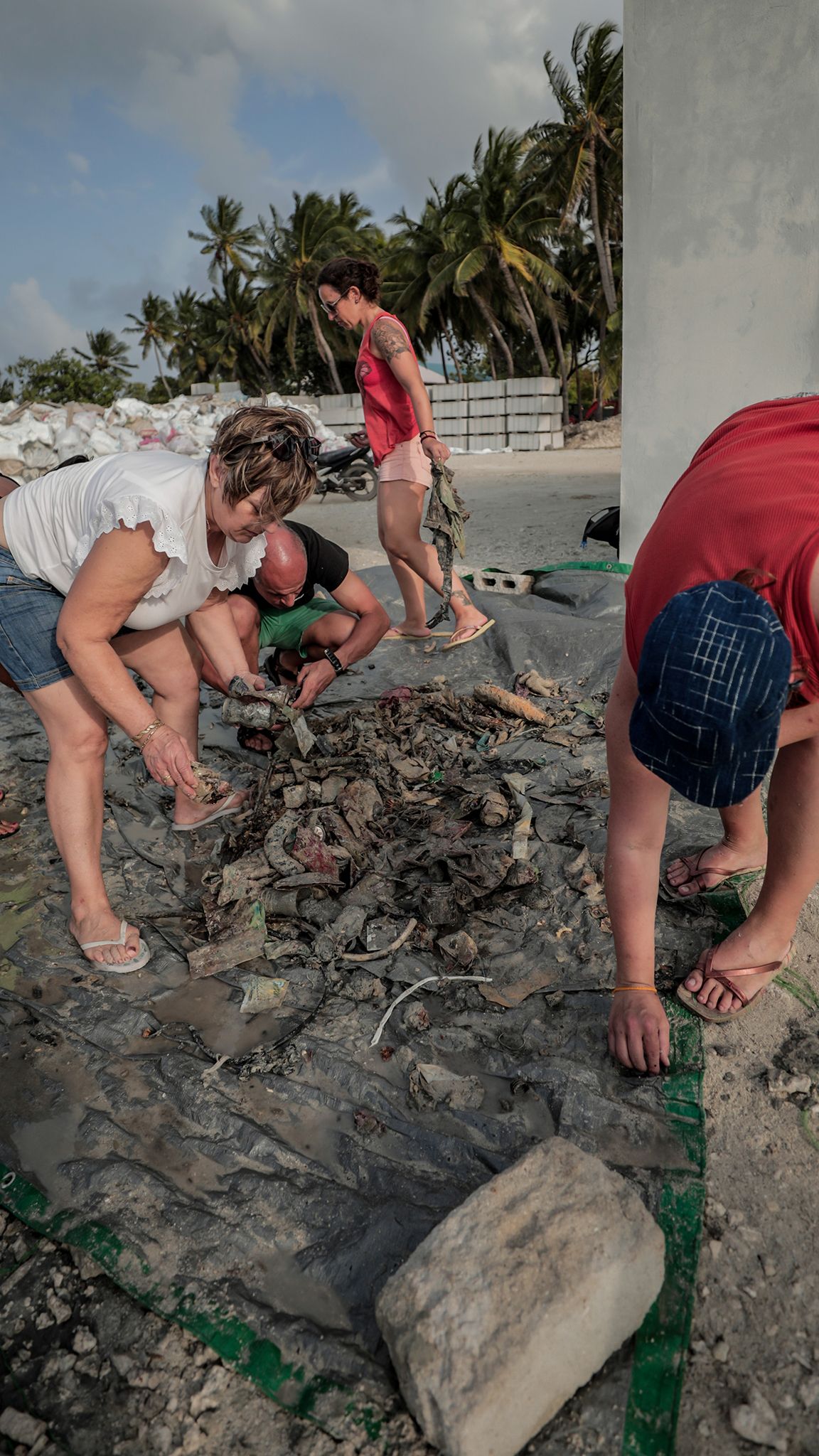 It was obvious that the council and other locals passing by were becoming aware of the big mess that tourism leaves behind and that it threatens the exact reason that they have tourism, which is the incredible underwater life. After 1,5 hours of diving, 15 divers had filled 4,5 big bags with trash. The only item on our list, that the council hadn’t been able to provide, was a weighing scale, but my guesstimate would be, that we collected around 300 kgs. 1,5 big bags of plastic, 1 with metal, 1 with glass and the last one with fabrics. The amount of fabrics we found really astounded me and is not something, I am used to on clean-up in Denmark and Sweden. I think, it must be because most clothes hang out to dry and is then carried by the wind.

The wind carrying trash away might be the greatest factor as to why trash end in the water unintendedly. So, let’s be mindful about the amounts of trash we create and how we get rid of it.

It is in our hands. 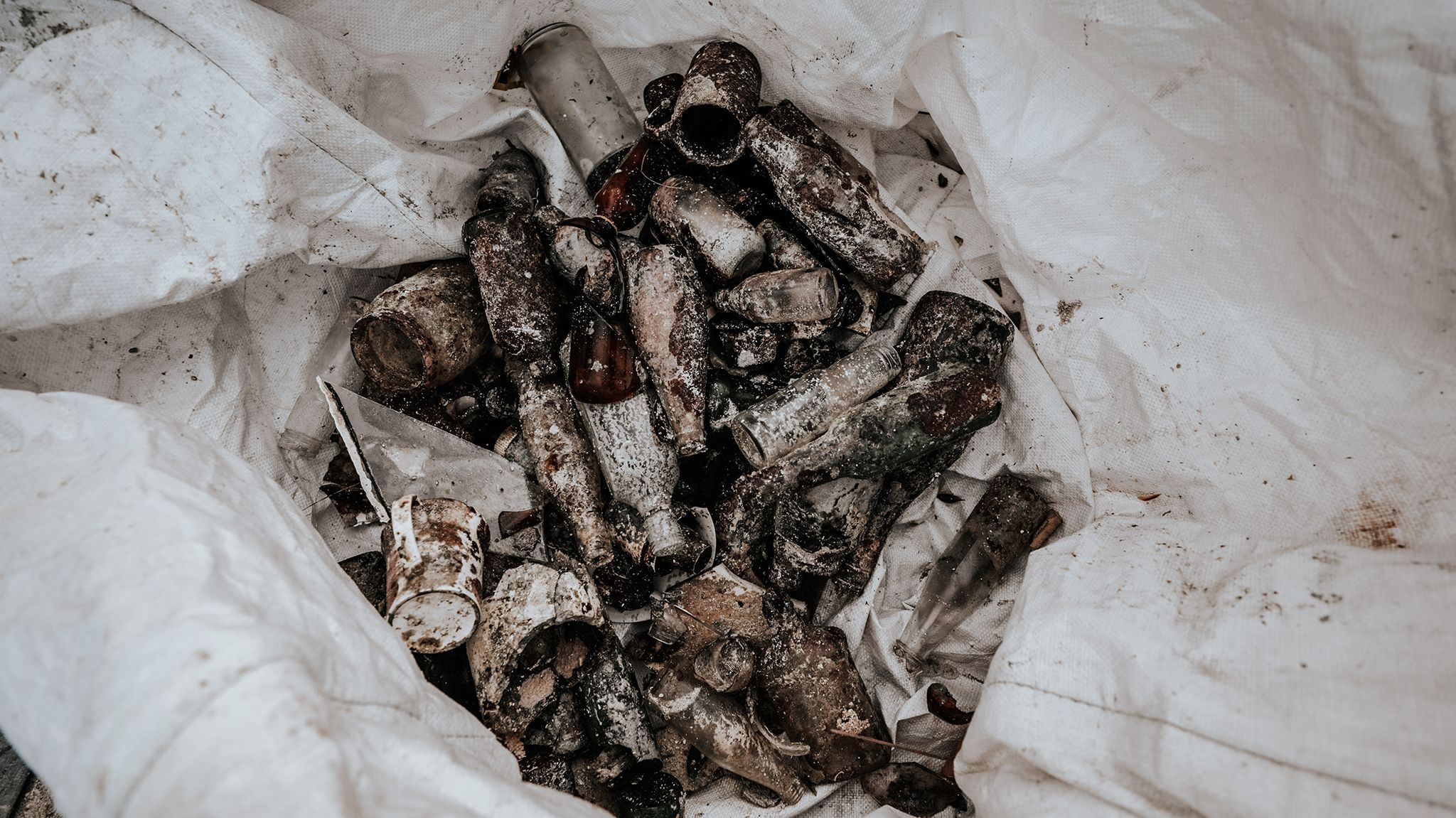 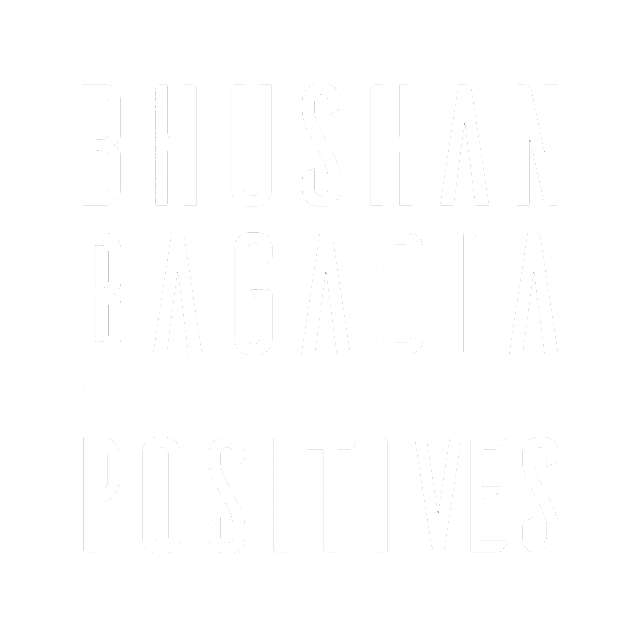 Thank you to everyone, that helped putting this event together. Special thanks to Firaag Ahmed, who took contactto  all relevent officials and dive centres. And thank you to all the volunteers, that willingly came and worked so hard under the hot sun. Also thank you to Simply Breathe and Bhushan Bagadia for being on board from the very beginning and for making the amazing footage that gives this blog its soul. What amazing memories this makes.

If clean-up dives is a new concept to you, check out my DAN blog on how to make every dive a clean up dive within safe parametres. You can find the blog here.

Below you find links to websites of everyone, who made this event possible. 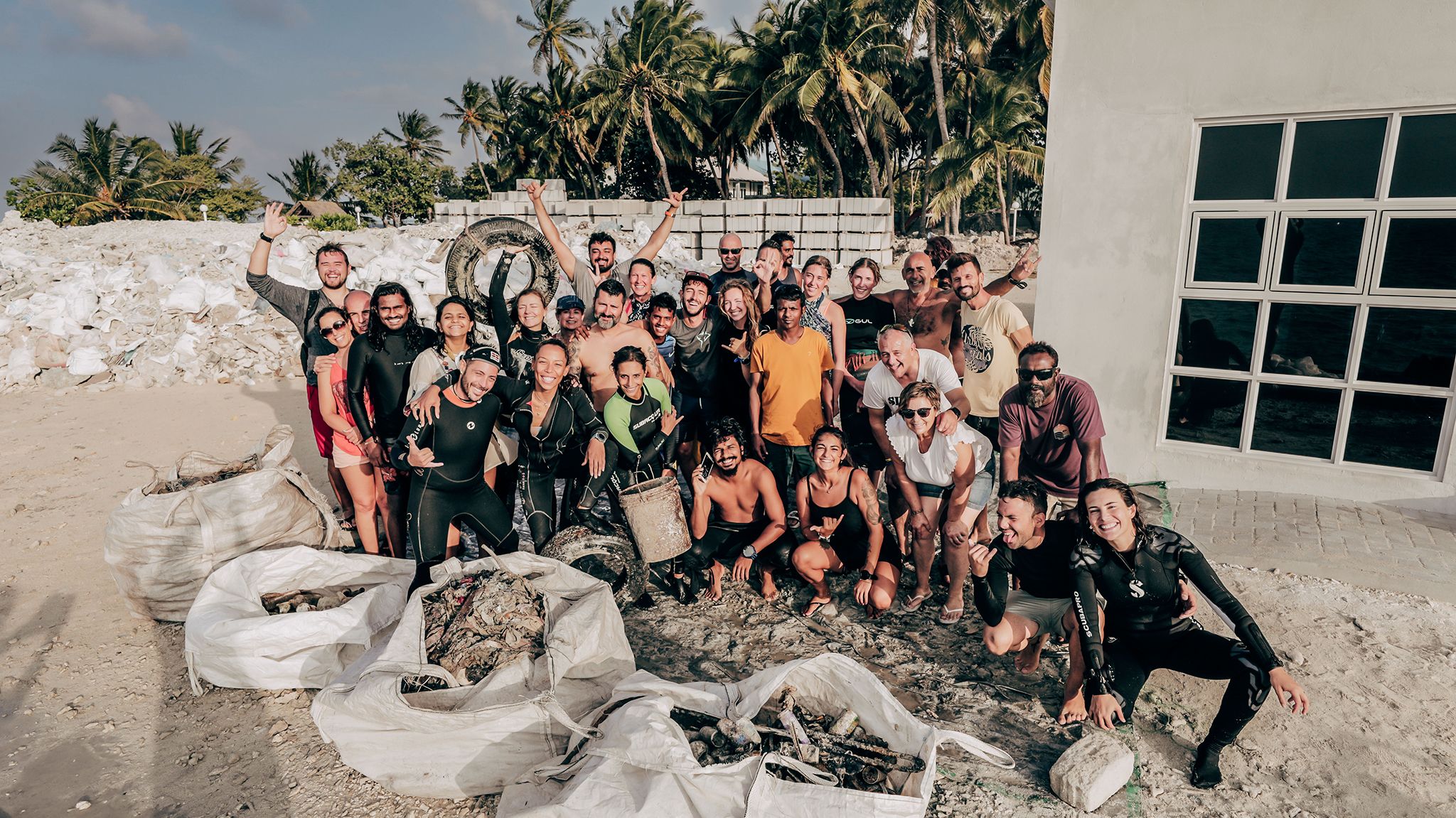 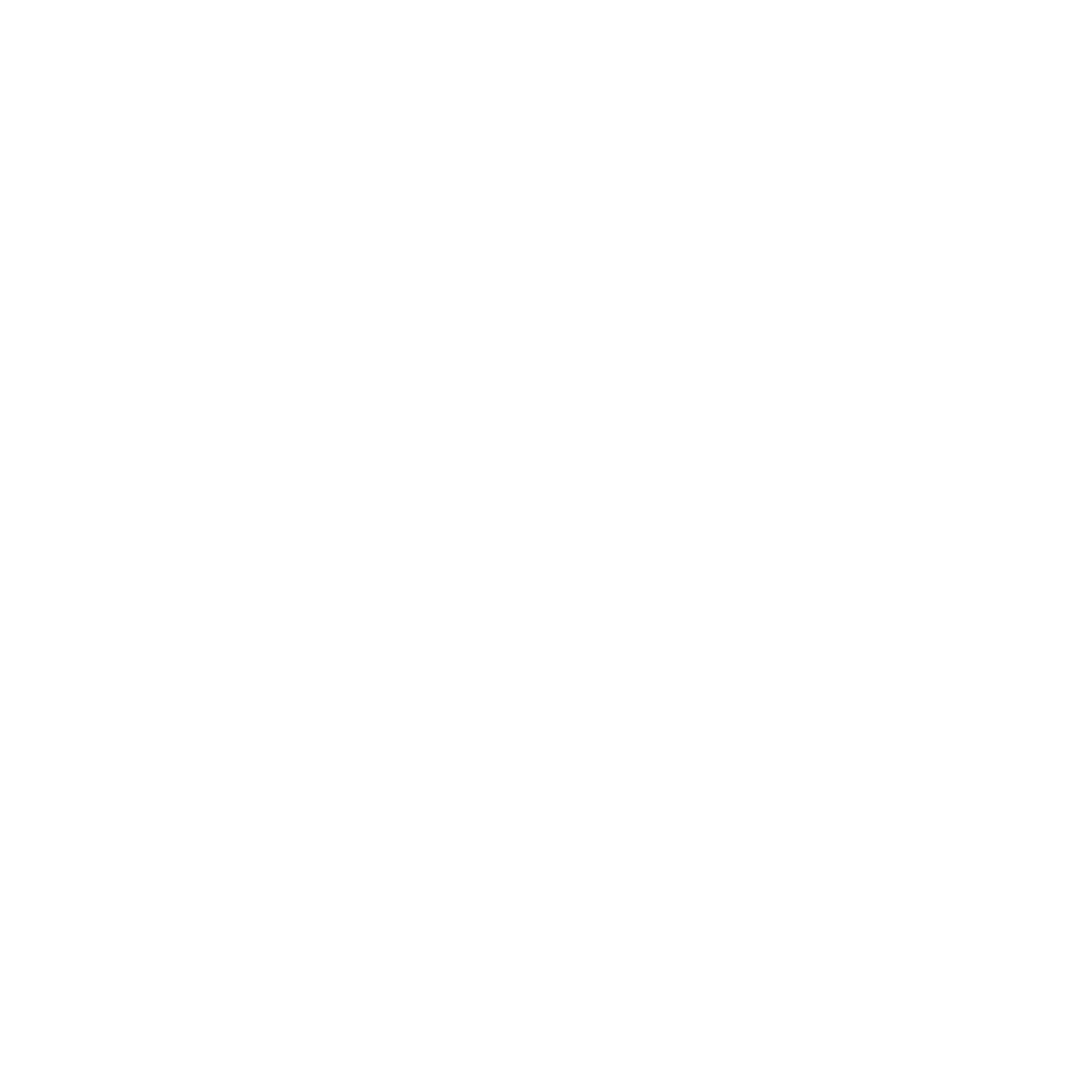